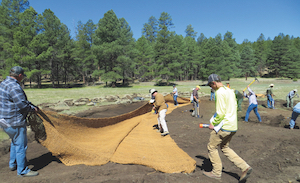 150 volunteers in the first phase of a high elevation meadow restoration project to stabilize streambanks and reduce erosion; maintain the meadow over time; and benefit a number of threatened and endangered wildlife species, elk, and downstream aquatic life. A longstanding partner of the Coconino National Forest, the Arizona Elk Society has played a major role in assisting the national forest with stream, wetland, and riparian restoration projects. The Arizona Elk Society has engaged numerous other partners to contribute more than 10,000 volunteer hours over the past decade.

In October of 2017 Steve Clark, Executive Director of AES did a presentation at the site of the Long Valley project to local Arizona Forest service personnel and USFS representatives from Washington.

Stephen Clark will be in Washington D.C. on June 12th to do a presentation on the project and receive the award at the awards ceremony at the US Department of Agriculture.

In partnership with the AZGFD and US Forest Service 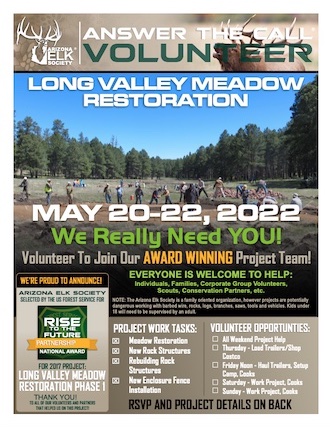 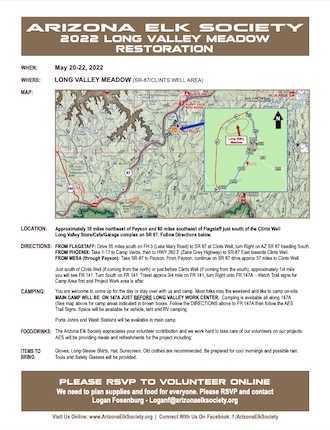 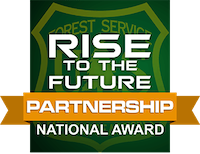 In March of 2009 the Arizona Elk Society facilitated the retirement of the Buck Springs Allotment in Northern Arizona. This allotment had many issues that made many parts of it challenging to the family that had worked it for years grazing cattle. Many threatened and endanger wildlife species live in the area and with the restrictions to grazing, it wasn’t economically feasible to graze cattle. The AES signed a Memorandum of Understanding with the Forest Service to work towards improving and restoring the natural elements of the habitat for the wildlife and our future generations. 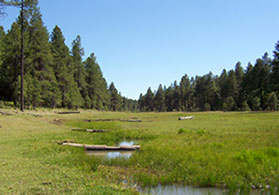 As soon as the documents were signed the Arizona Elk Society was planning our first work project to get on the ground and put our volunteer efforts to work. July 25-26th 2009 was picked as the first work weekend and the planning started. Word of our project found its way into the Arizona Wildlife Conservationist Committee where the AES has been at the table. The groups at this meeting felt that the AES Buck Springs project would be a good way for many groups that are at odds with each other most of the time could come together and find some common ground where we could work together. This was the catalyst that made this project one of the largest Wildlife Habitat Projects in Arizona.

The Arizona Game & Fish came to the table and asked to partner with the event to showcase an On-the-Ground work project with their annual Conservation Workshop. Many of the groups that typically attend the Arizona Game & Fish event already had signed on to volunteer at the project and the AZGFD decided to partner with all the volunteer groups and the Arizona Elk Society. The Department really helped out in a big way with many of the logistics that were created because of the number of anticipated volunteers. The Arizona Elk Society worked with Robert Garcia to identify barbed wire fencing in the allotment that was in disrepair and unneeded that could be removes from the Forest. Fencing was designed for cattle but in many cases becomes a danger and a barrier to wildlife safety and natural daily and yearly movements from food sources and bedding and to long range migrations. 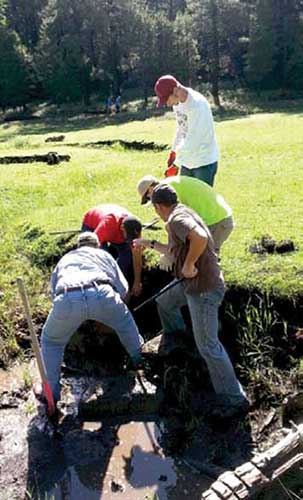 So the stage was set, camp site picked out, camp volunteers signed up, fencing to be removed mapped and designated. Then they came. From all over the State volunteers started showing up. At the high point the Arizona Elk Society fed 175-180 volunteers lunch on Saturday. We had identified 6 miles of fencing to remove but with the numbers of volunteers that portion was completed on Saturday so Robert Garcia from the Forest Service and his team went out and found another 3+ miles for the Sunday crews. The volunteers on Sunday were exceptional, we usually try to be back at camp by noon to pack up and even after nearly running out of water and energy the Sunday volunteers decided to stay out till all the identified fence was removed.

Thanks to all the volunteers we were able to remove over 9 miles of barbed wire fencing to improve wildlife habitat in 2009. Until you go out and work at one of these projects or see firsthand the before and after effects you may think that it won’t be noticeable but many of the volunteers commented on the visual difference especially in the open areas with the fencing removed. It was very rewarding to the Arizona Elk Society to see volunteers from all the diverse groups come together to physically accomplish this type of on the ground work. Larry Volyes, Director of Arizona Game and Fish commented that “When people and groups come together for a common goal great things can happen”. There were many people working side by side that may have had philosophical differences but on these days all were committed to doing something for the wildlife of Arizona.

There were so many people and groups to thank for the success of this project I know that I will miss a bunch of them. I will try to name some but please know that even if you don’t get mentioned, your individual contribution to the Buck Springs work project is very much appreciated. “Thank You”. Some of the people or groups that made this project successful include: All the volunteers of the Arizona Elk Society, Arizona Game and Fish, USFS Blue Ridge Ranger District, the Arizona Wildlife Conservationist Committee, the Sierra Club, Sky Island Alliance, Mohave Sportsmen’s Club, Anglers United, Ducks Unlimited, Tracks, Animal Defense League of Arizona, Mogollon Sportsmen’s Association, South Eastern Arizona Sportsmen, Coconino Sportsmen, Arizona Wildlife Federation and other groups. Individuals included: Director Larry Voyles, Ron Sieg, Jim Devos, Robert Garcia, Sandy Bahr, John Toner, our new AES camp kitchen boss Richard Mead, Commissioner Jennifer Martin, and many others that stepped up to help out.

Project in the News

When the Arizona Elk Society heads out on Saturday, May 3 with volunteers to help restore wildlife habitat near Payson, they will be joined by Field & Stream® as part of the magazine’s Hero for a Day program. The magazine will be filming the family-friendly project, to highlight the work of the volunteers and the area’s outdoor opportunities. It will be broadcast on www.fieldandstream.com, a top destination for sportsmen, as part of a ten-video series.

The Arizona Elk Society scored a big win when they were able to facilitate the purchase of the 73,000-acre Buck Springs allotment near Payson, Arizona and remove livestock for the benefit of wildlife, like elk, mule deer, whitetails, wild turkeys, and bears. Their seasonal work projects aim to restore flows to creek channels, rehabilitate wet meadows and remove harmful livestock fences.