Stories from our Members

AES would not be complete without the support and dedication of our staff and members.Updates and stories of experiences of members can be found here

Message from The President

Prior to 2020, my experiences with hunting had been very minimal since my younger years growing up in Prescott, Arizona. It has been something, though, that truly never left 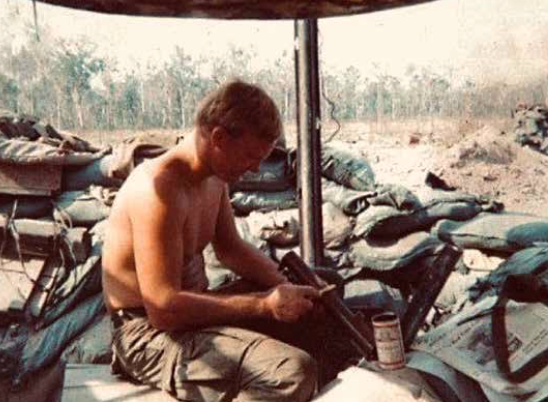 me. I can recall stories that family members and close friends shared with me over the years of their adventures in the outdoors. Stories full of excitement, trials and tribulations, and the camaraderie of fellow hunters. As I’d listen, the excitement from their experiences enveloped me. How I longed for experiences like those of my own!

Not knowing where to begin with the daunting process of getting started, which meant applying for hunts to acquire my own big game tags, I reached out to a good friend of mine who is well-versed in the entire process. After further discussion, he informed me about a local organization, Arizona Elk Society, and its Heroes Rising Outdoors program that specializes in taking wounded warriors on hunting trips. It turned out that, as an Army veteran who had been injured while serving in Vietnam, I could enroll in the program and have the opportunity to make my own memories in the field. With my application to the program completed, I waited anxiously for what the future might bring. My jaw dropped when I received a call from Tom Wagner, HRO program coordinator, who informed me of an unbelievable opportunity that had become available.

Mark Montanez is an Arizona resident who had been applying for desert bighorn sheep for several decades and had accumulated maximum bonus points. The summer of 2020 saw Mark receive both good and bad news. He finally drew his long- anticipated sheep tag but had also injured his shoulder to the extent he would have to forego hunting sheep that year. Rather than turning his sheep tag back in to the Arizona Game & Fish Department, he decided he wanted to see an Arizona disabled vet get the chance of a lifetime. He contacted Heroes Rising Outdoors and soon after that the tag donation process was completed. I will never forget Tom’s phone call telling me of my good fortune!

After fielding Tom’s phone call, I immediately called my brother Roger, also an Army veteran who had piloted Huey helicopters in Vietnam. When I told him the news, he could not believe it either. He exclaimed that he would be in camp even before I got around to inviting him! My anticipation to get into the field to look for desert sheep grew every day and 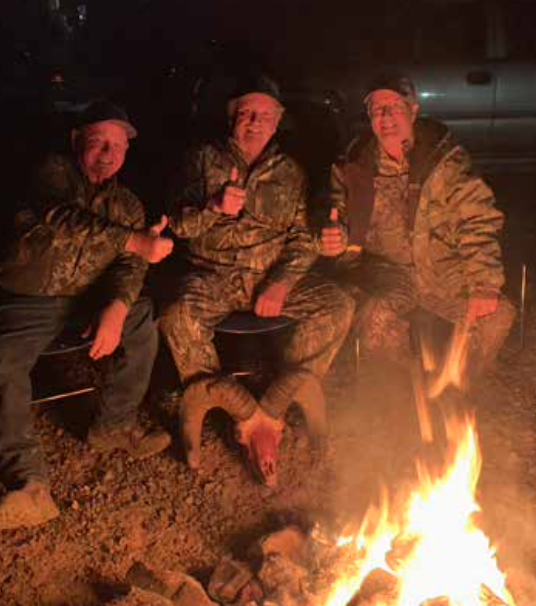 it seemed the number of sheep camp volunteers continued to grow as opening day approached.

After what seemed like an eternity, the day before sheep season was to open finally arrived! I found myself that evening sitting around a blazing campfire with a sizeable group of family members and friends. The Richardson family–Grandpa George, Corky and Russ, Deano and Christian, and even little George, would lead the expedition. Dick Tone would be shouldering the responsibilities of camp cook. Gil Montanez, the tag donor’s brother, represented his brother on the hunt. Many others had also arrived to lend their eyes glassing the mountains for sheep. We talked back and forth while looking at photos taken of rams on earlier scouting trips, sizing up which ones we should consider going after. After much discussion, we came up with a game plan.

The excitement thinking of the morning to come kept me awake most of that night. Even so, the eagerness anticipating the once-in-a-lifetime experience had me spry and ready to roll well before sunrise. Opening morning found us taking in an amazing sunrise as we sat on our glassing knob. The dawn grew into daylight and we eventually glassed up
a band of rams down low on the foothills of the mountains to our east. Mixed among the rams was the ram we were after. Wanting to make the most of the opportunity, we waited a while to get a grasp of the situation–what the group of sheep might do and which direction they might go.

The rams continued to side-hill around the mountain, neither gaining nor losing elevation in the process. Now was the time to make a move. The spot the rams were in made for a perfect stalk for Roger to be by my side throughout the entire way. Continued exposure to Agent Orange while in Vietnam makes it difficult for Roger to navigate difficult terrain, so if he was going to be by my side on any stalk, this would be the one. After maneuvering through a series of desert washes, we found ourselves on the edge of the mesa where we had last seen the rams. Knowing we were in close proximity, we slowly crept forward, scanning each new piece of ground as it unfolded. Suddenly a ram scurried across the hillside at our 9 o’clock position. 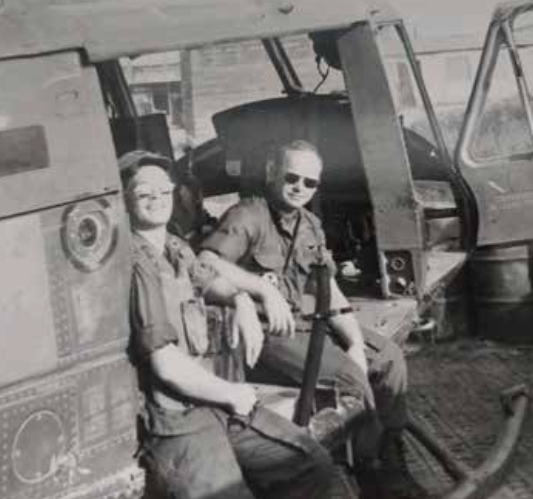 He finally stood still, staring us down from 200 yards away. As he stood there the rest of the band followed, ending up standing in line behind the lead ram. With our target ram identified, I got myself in position, placed my rifle’s crosshairs on the chosen ram’s vitals, and squeezed the trigger. As the gunshot went off, the ram hit the ground and cheering erupted! Walking up to the ram I could not put into words the feeling I had. Being able to experience that moment with my brother by my side was something I’ll remember forever. Reminiscing about the hunt, my emotions continued to flow from memories of the opportunity Roger and I shared on that mountain. Countless stories told and memories shared on the hunt–and over the decades together as brothers–will never be forgotten.

This adventure was indeed extra special for both of us –Roger’s health has been declining significantly recently due to advanced lung disease. Roger had been a warrant officer piloting Huey helicopters in Vietnam. He’d been exposed repeatedly to Agent Orange during his continual close support of troops on the ground. I knew that he’d be wounded by gunfire several times, but never knew he’d been awarded a Bronze Star until several decades after the fact. We share a brotherhood beyond just being siblings.

Roger has also submitted his application to Heroes Rising Outdoors. An opportunity arose for the two of us to go javelina hunting together in early 2021 via donated tags, but that hunt had to be cancelled due to his poor health. We’re hoping an opportunity presents itself with HRO so we can get out one more time together hunting deer in southern Arizona this fall. I still cannot believe the number of people who showed up in the middle of the desert to assist in making a special hunt happen for this veteran from another generation. Specifically, this would not have happened without the desert sheep tag donated by Mark Montanez and for Heroes Rising Outdoors bringing everything and the many volunteers together. Thank you from the bottom of my heart!

Heroes Rising Outdoors’ motto is “Healing through Hunting.” While hunting is a special part of the program, it is getting into the quiet of the outdoors itself and away from the 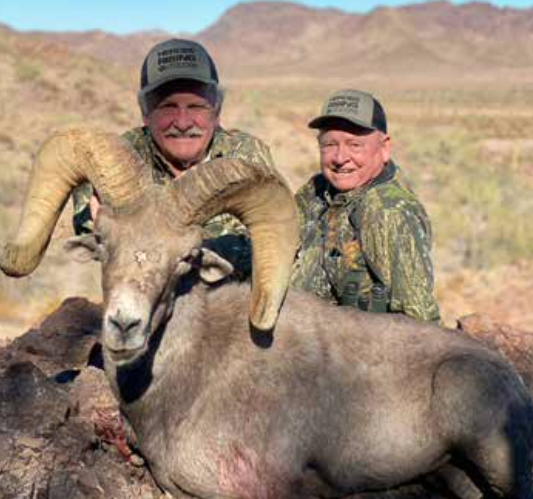 city that helps calm the storms inside us. It doesn’t matter whether you’re a young veteran, or a grizzled Vietnam vet like Roger and me, I’m convinced you’ll be a better person for your participation with HRO. While we all may have lost close connection with those who had our back overseas, thanks to the Arizona Elk Society we can link up with a new brotherhood here in Arizona. I encourage you to take that step!