Stories from our Members

AES would not be complete without the support and dedication of our staff and members.Updates and stories of experiences of members can be found here

Message from The President

My hunt started with a phone call from Tom Wagner, lead coordinator for Heroes Rising Outdoors, Arizona Elk Society’s outreach program for disabled veterans in Arizona. It was a normal phone cal–well, so I thought. We had been talking for a few minutes when Tom asked if I’d like to hunt elk by way of a donated elk tag. He then mentioned the clincher–“Pablo, by the way, it’s an archery bull tag in Unit 1.” I accepted on the spot! This would be my first archery hunt ever, and to hunt bull elk in one of the premium hunt units in the state of Arizona–wow, what an awesome opportunity!

Two weeks later and it was the week my hunt was to start. My hunting caregiver, Paul S., and I headed up to Sprucedale Lodge south of Alpine, Arizona to meet up with Jon Buseman, 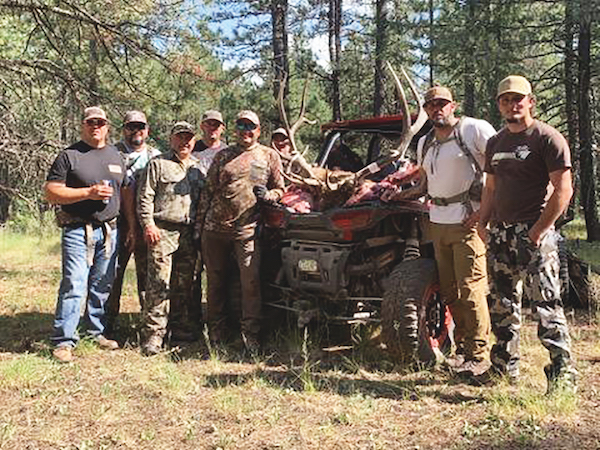 HRO’s White Mountain hunt coordinator. The lodge’s location offers some amazing views and features great accommodations! The evening before my hunt was to start, we had an awesome dinner with other hunters and were introduced to my guide, Tyler H. Plans for the following morning’s hunt were agreed upon–we’d be leaving for the woods two hours before daylight. Opening morning found us heading to a meadow where Tyler (“T-Light”) had been seeing a herd of elk. We settled into our spot while it was still dark–we could hear bugling bulls not too far away. As daylight approached, so did the screaming bulls!

We moved quietly to get a bit closer, hoping for a decent shot opportunity. We could hear the elk herd as it moved in our direction. That’s when Mother Nature’s plans took a detour. Just when we thought we would see our first elk, a pack of coyotes started howling and barking. Bye-bye elk! The herd was pushed back into the thick forest as we stood there in disbelief. To say we were disappointed is an understatement. The rest of opening morning found us moving to several locations that gave us different views of the countryside. We sat for a while at each, glassing ‘til lunch time. Later we did locate some mature bulls that afternoon–unfortunately none gave me a shot opportunity. We made a plan to back out, hoping to find them again the next morning.

The next two days went about the same–seeing elk, getting close for a shot, only to get busted by cow elk. Even though my injuries challenged me in closing distances to where I might have an ethical shot, T-Light and Paul were super patient, positive, and supportive. Sunday came to a close and Tyler had to return to work. Paul and I decided to join some other friends, including volunteer Gilbert G., who were camped and hunting nearby in Unit 27. 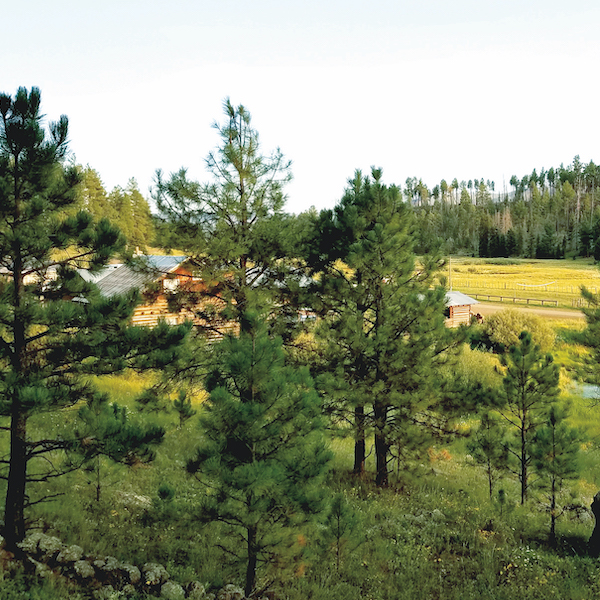 Day 4 arrived and Gilbert was positive we would see elk (and possibly have a shot opportunity) at a spot he knew about in Unit 1. Upon arriving at that location, we gathered our gear and started to hike into the woods. We had no idea what was about to take place. Only about two hundred yards into our hike, we could hear bugling in the distance. Things were looking up! We continued working our way towards the elk at my slow pace, listening to the bugles as we hiked.

We crossed a small clearing and started up a draw. As we approached the top of the draw, it was clear we were in the feeding path of a herd of elk! We picked out a tree for me to stand behind and I set up for my shot. Due to my injuries I have to shoot a crossbow, and use a shooting stick for support. Elk continued to move about, grazing and talking back and forth between themselves. It was a bit overwhelming to be so close to all that activity!

The first group of elk crossed in front of us at about 10 yards and included 4 cows and a 2x2 raghorn bull. Gilbert and Paul shook their heads “no,” not to shoot. The elk fed past us. Meanwhile, bulls were screaming all around us. I could not see what Gilbert and Paul were seeing coming down the draw. All I could hear was Gilbert calling out yardages, “90 yards–no shot yet.” Paul kept repeating “Get ready, calm yourself, don’t look at his rack, he’s a shooter.” Well, the shooter bull hooked some cows away from another mature bull, never to be seen again. About 30 seconds later I heard Gilbert: “72 yards, 71 yards, switch to the other side of the tree, 69 yards, 67 yards.”

All the while bulls were still screaming, raking small pine trees, stealing cows from each other. I finally eyed a mature bull at about 65 yards, but a cow elk stood between us and the bull. I had a pretty clear view of the bull, but really no shot due to a downed tree with branches sticking up blocking any shooting lane I might have had. The cow continued feeding, obstructing my view of the bull as she moved about. The bull let out a scream, then moved through an opening 67 yards away. His body filled the scope on my crossbow. My finger started to tighten on the trigger and the bolt was on its way, finding its mark right behind the bull’s shoulder!

A ton of fun was had throughout the hunt! Now reality was about to set in–getting a bull elk field dressed and transported to a meat processor. And that was one large elk, both in body and in antler size. For the record, my bull’s rack taped out to 360-7/8” SCI. Recovering my bull would not have happened as smoothly without the help of all the guys from Elk Camp Unit 27! Kenny and Kelly S., Refugio “Cuco” D., Adrian and A.J.F., Beto and Danny G., Dave L., Gabe “G-Lite,” and Lito P. (thanks for scoring my bull)–my body thanks all of you!! My time in the military was divided between the Navy and Army. I was medically discharged in 2013 due to spinal cord and other service-connected injuries. Heroes Rising Outdoors has given me a chance to heal while experiencing Arizona’s beautiful outdoors. This goes beyond my physical injuries–the time I now spend as a hunter conservationist has given me the opportunity to relax away from the often-times craziness of city life. To add to that, I’ve had the chance to meet other Arizona wounded veterans as we’ve started to build a new brotherhood of Arizona vets who find the outdoors a place of renewal. 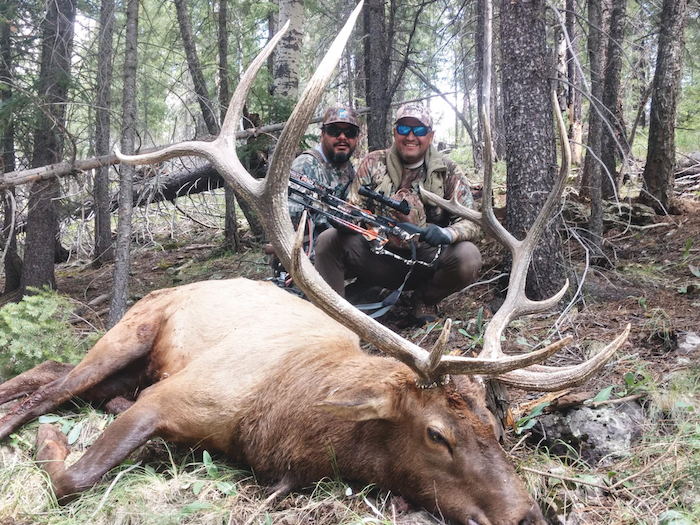 A big thanks goes out to Arizona Elk Society’s Heroes Rising Outdoors, and to those who choose to donate their big game tags so veterans can hunt, as well as to the many volunteers who selflessly give of their time and expertise! You all have helped me reconnect with the outdoors I love so much. Harvesting a bull elk was a special bonus!

Special thanks go out to Mr. D. for donating your bull elk tag! Also to Tom Wagner and Jon Buseman of HRO for putting my elk hunt together. The hunt wouldn’t have been successful without the guiding skills of Taylor “T-Lite” H., Paul S., and Gilbert “G-Heavy” G.–you guys are the best! Thanks also to Premier Taxidermy for the use of the crossbow and for mounting my bull! I’ll never forget the awesome accommodations supplied by Sprucedale Ranch and Lodge (my body will be forever grateful!). Fabulous meals and relaxing views --- it couldn’t get any better!

I would recommend Heroes Rising Outdoors to any veteran who may have thought they’d lost the ability to get out and enjoy life!

Thanks to the Arizona Elk Society, it is possible!